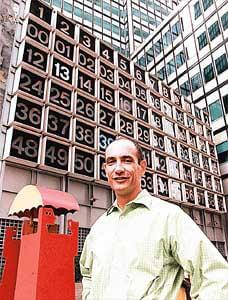 By DIANA B. HENRIQUES

or the financial services industry, the emergence of global capitalism has unleashed a new horror: global holiday schedules.

Say you are in Warsaw, Poland, on a particular Wednesday, trolling for business opportunities. It is a short hop to Lithuania, so why not call on a few bankers in Vilnius?

Here’s why not: That Thursday is a holiday in Lithuania, and when Lithuanian holidays fall on a Thursday, the Friday after is also declared a holiday. If you were going there on the previous Saturday, you would need to know that it became a normal working day. Got that?

And though inadvertently landing in Vilnius on a four-day weekend is a mere waste of time, consider the coming millennium celebrations. Financial caretakers are trying to close out important transactions before the end of the last business day of 1999. But just when will that be? New Year’s Day falls on a Saturday, and some countries don’t provide a weekday off when holidays fall on a Saturday. Except lately, several of those countries have decided to make Friday, Dec. 31, an ad hoc holiday.

Fortunately for the tacticians and quartermasters of international finance, there is Paul Spraos.

Spraos, 40, is the London-born founder of Swaps Monitor Publications Inc. in New York, which publishes a newsletter covering the exotic world of interest-rate swaps and other financial derivatives. Since 1992, Spraos has also produced an international holiday calendar, which heroically tries to identify all the holidays — “bad business days,” he calls them — that will occur in more than 100 countries over the next 100 years.

On Sept. 8, Spraos (rhymes with “house”) will begin offering his calendar over the Internet — at financialcalendar.com — a step he says will make it far easier for him to deal with the growing tendency of local governments to tinker with their holiday schedules.

“Holidays are changing more and more frequently, at a rate that would amaze people who don’t follow this,” Spraos said. Various financial centers “are changing their weekends, introducing or deleting a holiday or adding the millennium holiday. Or maybe their soccer team just qualified for the World Cup and they’ve declared a spontaneous holiday.”

Why do such far-distant holidays matter so much?

Swaps and other financial derivatives can span many decades and typically involve large sums — $100 million is routine. The price of a swap is determined by calculating the current value of all the payments to be made over the life of the deal. If some future payment dates fall on local holidays, the cash will not start earning interest as promptly as anticipated, throwing the price calculations out of whack.

“We need to know holidays approximately 30 years out,” explained Larry Weissblum, a vice president at the capital markets unit of Sumitomo Bank and a subscriber to Spraos’ calendar.

The millennium countdown would have been even more worrisome without Spraos’ service, added Adrienne Mageras, the operations support director for General Re Financial Products, a global derivatives dealer. “You need to know that you can’t make payments on that day in that particular country — and we’ve had six or seven centers declare millennium holidays in just the past two months,” she said.

Beyond the derivatives markets, banks and other financial institutions try to estimate their cash needs and anticipate their cash receipts — and both will be affected by future bank closings in the various countries where those institutions do business.

“You may be expecting a payment on a particular day, but if it’s a holiday you won’t get the money,” Spraos explained. “At best, it’s an inconvenience. At worst, it costs you real money. And the reverse is equally true: If you are the one obligated to make a payment on a particular day and it’s a holiday, you may not realize that the payment was actually due the previous day.”

As curious as it seems, creating a list of future holidays in individual countries around the world is anything but straightforward, as Spraos discovered in October 1991 when he accepted a friend’s challenge to develop a global calendar. “We thought we would turn the calendars out and have them laminated to send around to our subscribers as ‘freebies’ for Christmas that year,” he recalled.

That was when he began to appreciate that “holidays are not unambiguous creatures.” Indeed, Muslim and some Asian holidays are determined by the lunar calendar but may vary from country to country based on local lunar observation. Last spring, for example, the same Muslim two-day holiday varied by as much as five days among the 18 Muslim financial centers monitored by Spraos.

Moreover, each country has its own quirky way of determining when holidays will be observed. In France, for example, banks and the union representing their employees negotiate the bank holiday schedule each year. Sometimes different financial institutions within the same country even observe different holidays. And roughly 20 percent of the official announcements of future holidays turn out to contain errors, Spraos discovered.

Spraos said he soon realized that assembling a reliable financial calendar was going to involve so much research and labor “that it would be foolish to give it away.”

Instead, in 1992, when he published the first edition of his financial calendar, in book form and on CD-ROM, he offered it for sale. It sold well at $50 a copy, and the price was soon raised to $200. Eventually, he began to feed the data to his corporate subscribers electronically, so they could incorporate it into their own computer systems.

The Internet was a logical next step, he said. It will allow customers to choose whether to pay a flat monthly fee or pay each time they seek specific data, and it will offer subscribers enhanced software that will allow them to pose their own questions to the holiday database.

Already, more than 100 large financial institutions around the world, including most of the largest derivatives dealers, rely on the calendar to help them avoid running afoul of the countless holidays that will occur over the next century.

Well, actually, only one of Spraos’ customers — he won’t say who — subscribes for the full century’s worth of data. Most are content with the next two or three decades — a blessing for Spraos, since computer limitations restrict his Internet service to 30 years of holidays.

Over the years, Spraos has gradually expanded the scope of the calendar. The original version listed 18 financial centers, with a “center” defined as a category of financial institution in a particular place. (Banks in New York would be one center, for example, and the New York Stock Exchange would be another.) The current calendar encompasses 251 financial centers in 103 countries.

Countrywide holidays are simply impossible to provide, Spraos explained. Just in New York, the New York Stock Exchange, the New York Mercantile Exchange and the major New York banks all differ slightly in the holidays they observe. Many countries have regional holidays that affect banks in one city but not in another.

According to Spraos, Nepal has the highest average number of “bad business days” each year, with 26.5 weekdays off, although it observes only a one-day weekend. Romania has the fewest, on average, with 5.2 weekdays off.

Some future holidays — like those negotiated bank holidays in France — defy accurate calculations. Spraos deals with them by declaring them “asterisk holidays,” those for which he estimates a multiday range during which the holiday is most likely to fall based on historical data.

Of course, there are always the unexpected holidays: A sovereign dies, and the next day becomes an unscheduled holiday. But Spraos termed his calendar “as accurate as you can reasonably get for any prediction of future events.” It will be more accurate still, he said, once the Internet version is up and running.

That debut is going to have to wait until after Labor Day, however, Spraos, an avid bicyclist, is taking a holiday.