The main data file is available in three layouts, called Spreadsheet, TriCol and Deltas, each of which is accompanied by several supporting files. 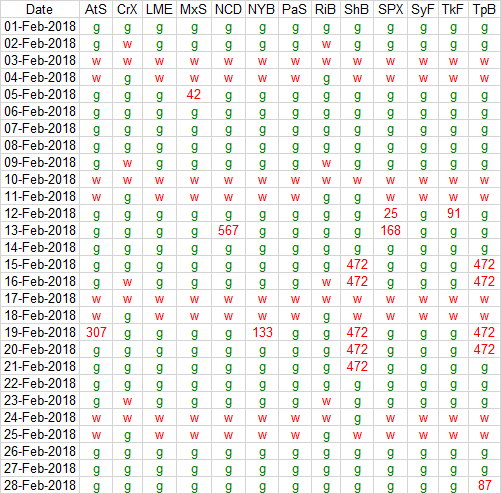 The Spreadsheet layout contains one column for each financial center. The first column contains the date, with each subsequent column indicating the status of each day in the respective center. The centers are identified in the top row by a proprietary three-letter code whose specifications are set out in a supporting file. AtS represents Athens Exchange trading holidays, CrX is the Egyptian Exchange settlement holidays, etc.

Every cell contains one of three entries: A “g” for a good business day; a “w” for a weekend; or a number for a holiday. For example, the Athens Exchange had one trading holiday during the period, on February 19. If you need to know the name of the holiday, you can reference one of the supporting files, which would tell you that the number 307 corresponds to “Monday in Lent”.

TriCol contains one row for each non-business day in each center. Unlike the Spreadsheet layout, TriCol does not contain good business days. However, since TriCol lists all non-business days, the good days can be inferred.

The sample above shows the same underlying data as in the Spreadsheet example. The left-hand column contains the date; the middle column the three-letter identifier for the center; and the right-hand column the status of that day in that center, with a “w” indicating a weekend and a number indicating a holiday.

The Deltas layout gives you a listing of all changes. The above example shows holiday number 289 for center AaB moving from February 16th to 15th. It also shows a new holiday on the third Monday of July for center ZbB.

The initial dump of data for Deltas customers assumes that all pre-existing data consists of good business days. In other words, there will be one record for every non-business day in every financial center.

All live feeds are offered in csv and txt. Your choice of layout does not affect the cost.